I get to list all sorts of houses in my work.  I love the variety, and the variety of people who are drawn to the different properties.

This spring, I've listed a big fixer in NE, a sweet little ranch on Mt. Tabor, a classy ranch in Reedwood,  a fab condo on SE 44th and Division, and a big traditional beauty in Hawthorne.  Now, I've just listed a sweet bungalow in Roseway (think where NE Fremont crosses NE Sandy).  Click for a map of a few good spots. 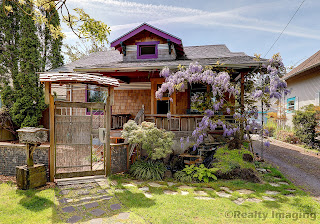 The sellers are friends of ours, so I've seen this house over the years (didn't we play Cards Against Humanity once at that dining room table?).  With lots of hard work; packing away stuff, cleaning and prepping, I think the place looks great!

One of the sellers is an artist and furniture maker.  He has done some truly beautiful work here.   The kitchen was re-done with some incredible finishes: 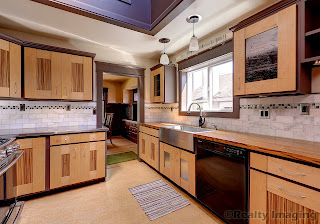 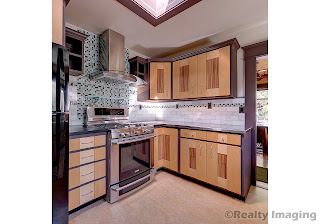 That backsplash is subway style marble with racked glass details.  The cabinets are maple veneered apple ply and zebra wood.  And the counters are stainless steel and zebra wood.

The master bedroom has custom built-in dressers and bed of Wenge and reclaimed Honduran Mahogany. The ceiling is woven maple.  Plus there is a walk-in closet built with cherry wood. 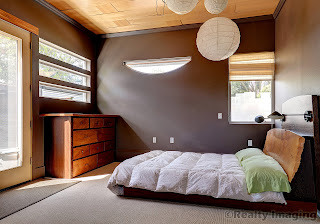 Then there's the master bath with a copper (!) shower and slate floor with radiant floor heat. 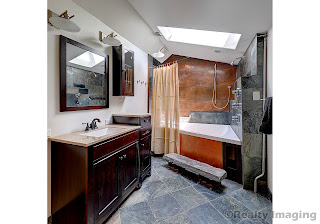 Oh year, and lest I forget the dining room with bamboo floors and traditional built-ins: 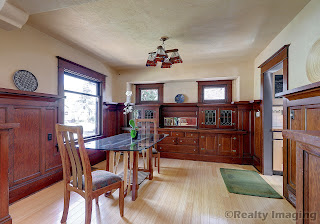 There's lots more; photo voltaic solar, on demand hot water and a high efficiency furnace.  The back yard has a deck (with wiring for a hot tub), outdoor shower, grill shack and bike shed. 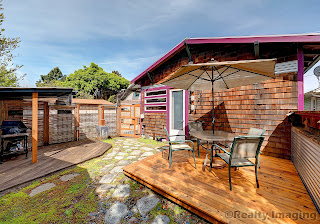 Posted by Leslie in Portland at 8:56 PM No comments:

Hmm.  I've been feeling like the market has slowed just a tad, and the latest stats from RMLS, released this week, may back me up.

Inventory crawled up a bit, from 1.3 months in March 2017, to 1.7 months in April 2017.  April 2016 had 1.4 months of inventory.  Remember, this is how long it would take to sell all the properties on the market, at the current rate of sales. The 1.7 months of inventory is still VERY low inventory.  We consider a balanced market, when neither buyer nor seller have an advantage, to be around 5 or  6 months.  We're a heck of a long way from there!

Prices are still going up; comparing the median price of homes sold in the 12 months ending April 30th 2017, with the median price of homes in the twelve months preceding April 2016, we have seen an increase of 11.6%,  Market time is shortening; 42 days on April 2017, down from 58 days in March 2017.  Increasing pirces are often attributed to a shortage of inventory. 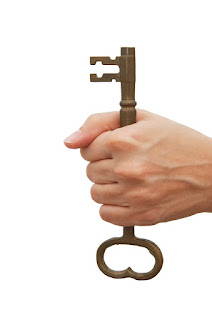 What are the factors that could be at play?  Elliot Njus, at the Oregonian, attributes the slowing to a lack of inventory.  But our inventory is a bit higher than last month, and higher than it was last year at this time.  Slightly increasing interest rates?  Political unrest? Rent stabilization measures by Portland and Milwaukie?

What's to come?  We usually see a bit of slowing in the summer, Its so gorgeous here in summer, I feel like a significant percentage of buyers and sellers are vacationing at any given time.  I expect that will be the case this summer too.  That will mean fewer houses on the market, and fewer buyers looking.

If you have questions about the market, or are thinking of buying or selling, give a call, text or email.  leslievjones@gmail.com 503-312-8038.

Posted by Leslie in Portland at 9:59 AM No comments:

My not unbiased take on the X-Ray Rent Control debate held last night at the Alberta Rose Theater.

First off, in general, I am not a Jefferson Smith fan; something about anger management and a date rape accusation.  But, he did a very good job as moderator of such a hot button topic.

As you might imagine, the room (Alberta Rose Theater) was about 2/3 pro-rent control to 1/3 anti.  Tenants and tenant’s rights groups were out in force,  I’m not sure why landlords were so under represented.  So, lots of landlord bashing, and a strong sentiment that housing is a basic right, profit from housing wrong and that people should be able to live where they want in the kind of housing they want.

I’m not sure about housing as a right.  We do live in a capitalist society. Housing does cost money.  Our economy is set up such that the majority of housing is owned and provided by private entities.  Those owners take financial risk and contribute significant financial resources to own or develop housing. That is just plain reality.  Right, wrong, good, bad, it just is.  Similarly, different neighborhood and different types of housing vary in price.

I was rather appalled at the disrespect shown, even by “pro” debater Margot Black, and Commissioner Eudaly.  I don’t think eye rolling, grimaces and thumbs down signs are appropriate in a debate.  And I didn’t think Commissioner Eudaly (remember, that is how we are to refer to her) should have taken question time to make a speech.  Doesn’t she have enough of a bully pulpit?  And wasn’t that question time for people to be heard?  And of course a good amount of hisses, talking over, etc.

There was a fair amount of mis-information.  Margot Black, with Tenants United, gave many an impassioned speech, one talking about how we have no rent control and landlords can raise rent 100%.  Last I checked, we’re under a 10% cap, have lost the “no cause” eviction option, and can, under certain circumstances, be required to pay thousands of dollars to tenants we want to move out.  That kinds feels like rent control, to me.  She was not corrected.

Both debaters were pushed to cite examples of housing markets they thought were working well.  Gerald Mildner (anti) believes in no rent control, and thinks bringing more land into the urban growth boundary, would address some of the supply issues, thus driving down costs. He, when pushed, gave Atlanta, GA as an example of a more balanced and healthy housing market (note, healthy does not mean hugely appreciating).  Margot Black cited Vancouver, BC.  And a questioner cited Amsterdam.  No one mentioned that housing markets in other economies will behave differently.  For instance, real estate finance is VERY different in Canada.  How their rental market acts is also bound to differ.

The “pro” argument was about stabilization, both of rent and communities and neighborhoods.  There are varying numbers showing the in migration to Portland, and some mention that stabilization does nothing to house all the folks moving here.  Margot Black failed to provide any provision for housing all those people.  The focus was on protecting and stabilizing those already here.

I was surprised at, what I heard as, xenophobia.  Portland first can sound a bit like America first, but somehow Portland first is cooler.  I don’t have numbers to back it up, but I’ve had the sense that a good amount of Portland’s diversity is from the recent surge in folks moving here.  So, I hear Portland first as perhaps a bit racist.  And yes, the room was pretty white.

There was some talk, and concern for vulnerable populations, elderly, mentally ill, addicted, LGBTQ etc.  I think all agreed, pro or anti, that these populations can be more greatly impacted by a rapidly appreciating housing market.

What I should have asked is this, “We bought our properties long ago, we have aggressively paid down our mortgages (that’s money not spent on vacations or other luxuries), we manage them ourselves, and do much of the work on them ourselves, including yard work.  Are we not entitled to greater profit than someone who bought at 2-3 times the price we did, carry higher mortgages, pays a property manager and pays for all maintenance and improvements?”  I don’t view us as making our money at the expense of our tenants, but rather making our money through diligence and hard work.
The housing crisis in Portland, and other cities, is a huge, multi-faceted problem.  I do believe landlords, developers and real estate agents do need to be part of the solution.  We need many solutions.

I can see bringing more land into the urban growth boundary (and creating more neighborhoods like Orenco Station, a walking neighborhood with good access to public transportation and close to employment).

I would be open to an annual, per unit fee on rentals to go to a fund for low income renters.

I don’t mind a cap on rent increases during a tenancy.

I might be okay with the 90 day noticing for no cause evictions and rent increases.

I’d love to hear other thoughts.

Posted by Leslie in Portland at 10:21 AM No comments: